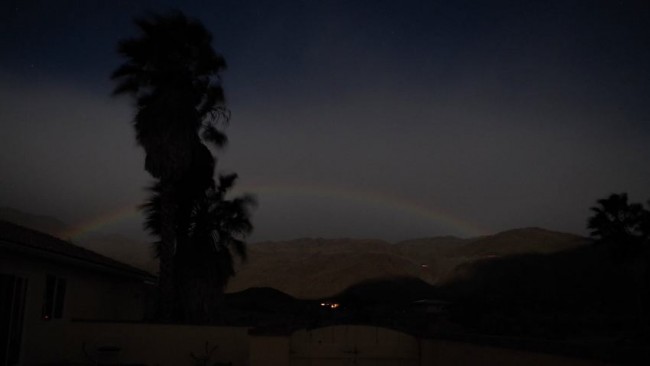 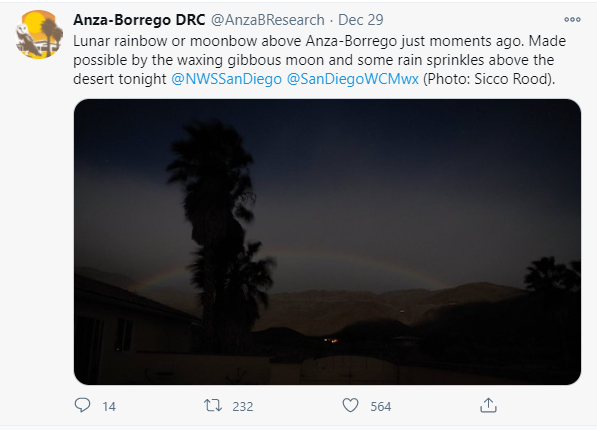 December 28, 2020, after the first storm of the season, moved out of the region to end a day of rain and snow in California. People who took a look at the night sky outside spotted a rare lunar rainbow over the Anza-Borrego Desert.

It is not uncommon for rainbows to be seen during the storm season as naturally occurring phenomena after a rain. As NBC Los Angeles weather forecaster David Biggar said, "Anytime you get enough light hitting raindrops, you can get refraction of light and end up with a rainbow. They're just so rare to see at night because they're so faint and hard to make out. After all, your eyes at night are not sensitive to color like that."

These lunar rainbows are often fainter compared to solar or common rainbows because the intensity of the light reflected from the moon's surface is lesser than the light directly from the Sun's rays.

Even if these rainbows are not as radiant as those seen during daylight, the night time setting definitely gave it a more majestic appeal.

Tweets about the magnificent phenomena' magnificence surfaced immediately as the unusual sight wowed many Californians who witnessed the rare nighttime rainbow.

Aside from the difference in the light source that creates these rainbows, their forms are not dissimilar to regular solar rainbows.

These rainbows are caused by the refraction of lights in the water droplets like rain showers or waterfalls. They are always positioned in the opposite part of the sky from the moon relative to the people observing it.

Due to the reduced amount of light reflected from the moon's surface, Moonbows are much fainter than solar rainbows.

A full moon near its most radiant point is needed to have a chance at seeing a moonbow. Weather conditions must be optimal. The sky must be dim, and the moon must be very low on the horizon. The precipitation should have also occurred in a position opposite to the moon.

Because of the specific conditions needed to have at least a glimpse at these moonbows, they are considered highly rare.

One of the first recorded mentions of the moonbow is found in Aristotle's Meteorology that dates back to circa 350 BCE.

Aside from Lunar or moonbows, here are some other rare astrological phenomena:

Blue Moon - A rare visual anomaly that makes the light that the moon radiates seem bluish in hue.

The Transit of Venus - This occurs when the Planet Venus is visibly seen when it travels between the Sun and the Earth.

These are genuinely magnificent events that only occur for a limited time in one's lifetime.