Black vultures have been settling a town in southeastern Pennsylvania in astonishing numbers, settling on roofs and trees, defecating profusely, and causing substantial damage to properties in the tune of thousands of dollars.

Resident John Enterline said the vultures were regular visitors in the previous years but this year the problem has become more extreme as "there are many more of them,"

The problem with the black vultures 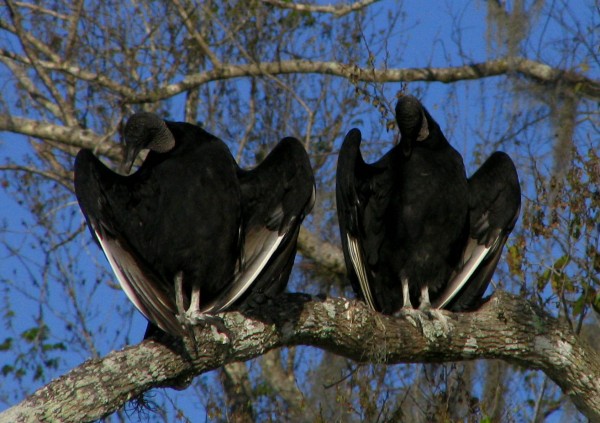 (Photo : Wikimedia Commons )
Black vultures have been settling a town in southeastern Pennsylvania in astonishing numbers, settling on roofs and trees, defecating profusely and causing substantial damage to properties in the tune of thousands of dollars.

Residents are having a problem with the black vultures for two reasons: they poop anywhere and they tear roof shingles and rubber roofing. Their poop leaves their roosting sites white, while the damage on the roof would cost thousands of dollars after the vultures settle there.

Bob Schutsky of the Lancaster County Bird Club noted that black vultures have a fetish with rubber.

Despite being a menace to Marietta homeowners. Black vultures survived through successful conservation efforts.

In 1918, a federal law was passed the prohibits shooting the birds for feathers, and banning DDT and other pesticides protected these birds from bio-accumulation and other ill-effects of the said pesticides. Over the year, the range of black vulture has also expanded most likely because the opening up of roads has led to more roadkill, and temperature changes due to climate change have also caused a lot of animal fatality.

As scavengers, black vultures were considered helpful scavengers and were allowed to feast on the outskirts of meat markets in the southeastern US.

As it is now, black vultures are protected and can only be killed if granted a federal permit.

READ ALSO: Methane Gas Flares Scorch Owls and Hawks at Waste Landfills in the US

These birds prefer warmer roosting sites in winter to keep them safe from predators and have easy access to food. Thus the reason why the birds settle on the roofs of Marietta's residents.

Pennsylvania residents keep the birds away from homes

As bothersome as their visitors may seem, residents of Marietta, Pennsylvania have not resorted to lethal solutions just yet. Instead, residents bang pots and pans and set off lightning fireworks to keep the birds away from their rooftops or backyard.

According to the Pennsylvania director of the U.S. Department of Agriculture's Wildlife Services department Harris Glass, these measures are effective in driving away from the birds.

Another option is also to apply permission to display a taxidermied black vulture scaring away birds, but this would come with a cost of hundreds of dollars.

Residents of this small Pennsylvania town also have reported that the black vultures, which have a wingspan of up to five feet, have also searched foods at their roof's porch furniture and garbage cans.

READ NEXT: Albatross and Petrels: Intentionally Killed and Mutilated by Fishermen in Southwestern Atlantic