A Saw-whet Owl (Aegolius acadicus) was rescued from Rockefeller Center Christmas tree days after it had been chopped down upstate.

Ellen Kalish, the founder, and director of Ravensbeard Wildlife Center in Saugerties, New York, got a call on Monday from a woman she did not know. The woman asked if her husband could donate an owl to Kalish's wildlife rehabilitation center.

Kalish told the lady to bring the owl to their center, and they will give the owl an exam to make sure he is okay.

On Tuesday, Kalish met with the couple, and they handed the tiny bird: an adult Saw-whet owl, which is the smallest owl in North America.

The caller's husband, it turned out, was from Rockefeller Center, and he helped transport this year's Christmas tree from Oneonta in upstate New York to Midtown Manhattan, where the tree was set-up. 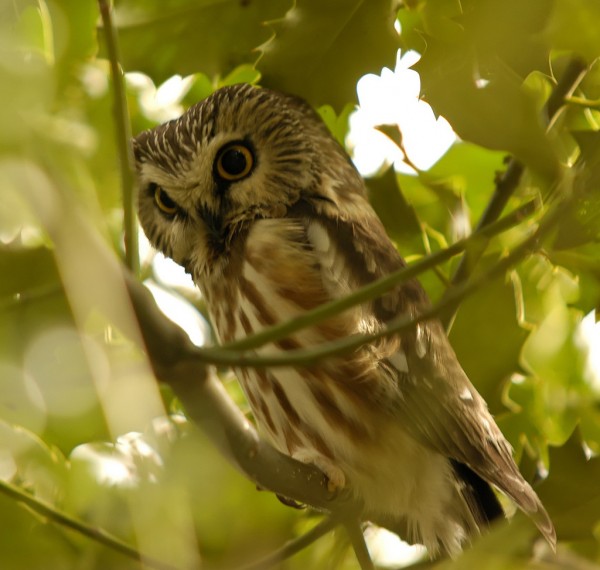 (Photo: Wikimedia Commons )
A Saw-whet Owl (Aegolius acadicus) was rescued from Rockefeller Center Christmas tree days after it had been chopped down upstate.

READ: Albatross and Petrels: Intentionally Killed and Mutilated by Fishermen in Southwestern Atlantic

The Saw-whet Owl was named Rockefeller

They named the owl Rockefeller.

The owl had not eaten or drunk anything since the tree was cut on Saturday, so Kalish brought the owl home, where it ate several frozen mice and drunk a lot of water.

The owl is expected to see a vet on Wednesday afternoon and receive x-rays to ensure that none of its bones were harmed during the tree's transport and while the spruce tree is being set up at Rockefeller Center.

The owl will eventually be released in Saugerties. According to Kalish, adult Saw-whet owls move and rarely stay in one place; thus, there is no need to release the bird back in Oneonta.

"It doesn't really matter where we release him - he's going to go wherever he wants," she said.

The spokesperson from Rockefeller said that "We inspect each branch of the tree individually before it's wrapped, but birds sometimes can find their way into it on the journey."

A Secret in the Rockefeller Center Christmas Tree Ravensbeard is excited to share a rare Holiday story with you. ... Posted by Ravensbeard Wildlife Center on Tuesday, November 17, 2020

Saw-whet owls are one of the most common owls in the forests across North America. These owls are highly nocturnal and are quite elusive; thus are seldom seen.

Their call sounds like a saw being sharpened on a whetting stone.

These owls prey mainly on mice, particularly the deer mice of the genus Peromyscus.

The female does all of the incubation and brooding while the male does the hunting. As the youngest nestling turns 18 days old, the female leaves the nest to roost somewhere. The male will continue feeding the nestlings, with the older nestlings assisting him feeding, the younger siblings.

The female saw-whet maintains the nest's cleanliness, but when she leaves, the mess will start to accumulate. The nest becomes a cavity of a thick layer of feces, pellets, and rotting prey parts.

Saw-whet owls migrate, and studies showed that they could cross the Great Lakes or other large water bodies.

Kalish posted the Rockefeller Center incident on Facebook, where she garnered 2,500 shares as of Wednesday afternoon. The good news amid this year's turmoil. Ravensbeard Wildlife Center is also asking for donations for Rockefeller and other furry friends rescued in the center.

READ NEXT: Rodent Poisoning: Deadly Impacts on the Birds of Prey