What Happens After the US Leaves The Paris Climate Agreement?

Nature featured how the withdrawal will affect global efforts to mitigate climate change:

READ: US Has Formally Withdrawn From the Paris Agreement on Climate Change

How is the Paris Agreement faring in a nutshell?

In September, China announced its plans to make the country's economy carbon neutral by 2060. China is the world's top emitter of greenhouse gases.

Meanwhile, the European Union (EU) is packed with the EU's Green Deal, which set a road map for making the bloc carbon neutral by 2050 using various strategies like tapping renewable energy, nuclear power, and carbon capture. EU has reduced its greenhouse-gas emissions by 24 percent compared to the 1990 levels. Lawmakers are discussing policies on how to attain full carbon neutrality.

Japan and South Korea made commitments to be carbon neutral by 2050, but details on how to get there were not year detailed.

More than 60 countries worldwide, including all EU member states except Poland, have committed to having net-zero emissions by 2050.

In the US, before Trump's presidency, the country committed to reducing emissions by 26-28% below 2005 levels by 2025. When President Trump got elected, he has been vocal about his preference for fossil fuel. Several climate-related climate regulations, such as policies on air pollution, emissions, drilling, and oil and gas extraction, have been reversed during his first term. Last month, a report by the US energy department lauded oil and gas as it "provides energy security and supporting our quality of life." In June 2017, Trump announced the pull-out from the Paris Agreement. 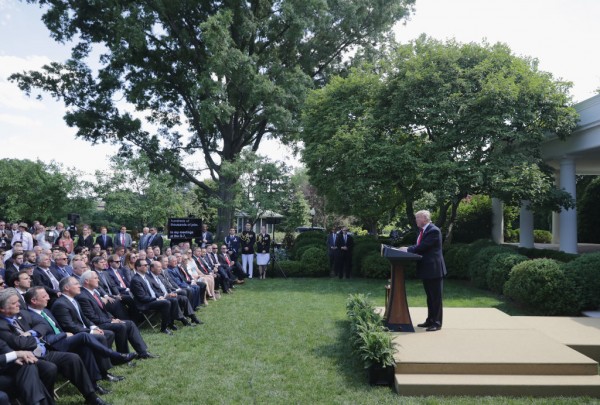 (Photo: Getty Images)
U.S. President Donald Trump announces his decision to pull the United States out of the Paris climate agreement in the Rose Garden at the White House on June 1, 2017, in Washington, DC. Trump pledged on the campaign trail to withdraw from the accord, which former President Barack Obama and the leaders of 194 other countries signed in 2015. The agreement is intended to encourage the reduction of greenhouse gas emissions in an effort to limit global warming to a manageable level. (Photo by Chip Somodevilla/Getty Images)

How will this decision impact the US and the world in general?

READ NEXT: 5 Controversial Policies in the US Related to Climate Change

Check out for more news and information on Climate Change on Nature World News.