Rescuers and volunteers raced against time by returning 100 whales to the sea of Sri Lanka's western coast on Monday. The incident was Sri Lanka's biggest mass stranding ever recorded.

According to the local police chief Sanjaya Irasinghe, the short-finned pilot whales started beaching at Panadura, 15 miles south of Colombo, before dusk. After an hour, the numbers swelled to around 100.

Authorities quickly mobilized to send the whales back to the sea. Locals joined Sri Lanka's navy and coast guard in helping the whales.

Sri Lanka's Marine Environment Protection Authority (MEPA) said that the incident was the largest mass stranding of a single pod of whales in the South Asian country.

The cause of stranding was unknown, but, unusually, many whales reach their shores, MEPA chief Dharshani Lahandapura told AFP. 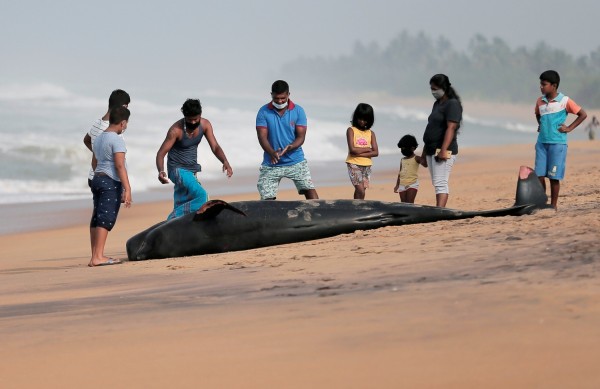 READ: Marine Reserves Will Protect Species Such as Antarctic Krill From Global Warming and Overfishing

Pulling the beached whales back to the sea

Irasinghe said that residents helped them try to push back the whales into the ocean.

However, they kept getting washed ashore. "We are getting help from the navy to rescue these whales," Irasinghe said.

The whales were pulled back to the ocean through day and night using jet skis provided by a local water sports club were used, the Sri Lanka navy statement said.

The joint effort t of the rescue teams working through the night with the help from the navy, coast guards, lifeguards, and residents paid off: about 110 pilot whales were saved in a day-long rescue effort.

Four whales died on the beach, and authorities are still investigating its cause of death.

Pilots whales are highly social, and it measures up to six meters (20 ft) long and weighs a ton.

Although the cause of mass stranding is still unknown, the navy said that the whales might have followed one whale off the course and got stranded. 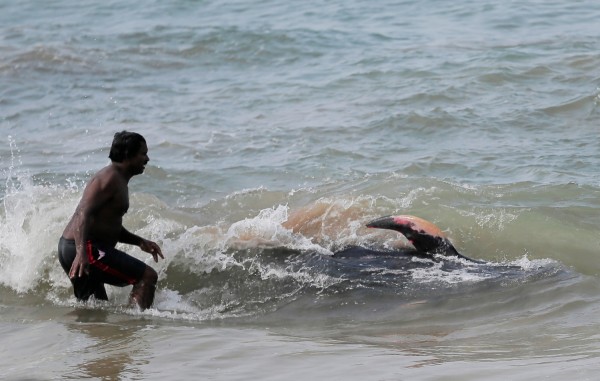 (Photo: Reuters Connect )
A villager tries to push a pilot whale after being stranded on a beach in Panadura, Sri Lanka, November 3, 2020. REUTERS/Dinuka Liyanawatte

Mass stranding of whales in Australia

MEPA chief Dharshani Lahandapura said that this incident is similar to the mass stranding in Tasmania in September.

Nearly 500 beached whales were found in Tasmania, Australia, in September.

At first, around 270 pilot whales were stranded in Strahan, and Tasmania's rescue teams are working frantically to save the whales. Up to a third of the animals were already dead.

Days after, another 200 whales were stranded farther south in Macquarie Harbour, which authorities believed to be part of Strahan's same mass stranding event. The incident is the largest mass stranding in Australia. The total number of stranded whales was more than 450, the Department of Primary Industries, Parks, Water, and Environment.

Twenty-five of the Strahan whales were rescued by Tuesday and were released to the sea using a boat and sling.

The same thing might have happened to the 100 beach whales, the largest mass stranding incident in Sri Lanka.

READ NEXT: Orcas Are Damaging and Harassing Boats Near Portugal and Spain, From Galicia to the Strait of Gibraltar

Check out more news and information on Marine Animals on Nature World News.