An exotic species of sparkling beetle, the Agrilus planipennis or the emerald ash borer, is wreaking havoc and killing North America's ash trees.

This metallic green exotic beetle was first found in North America in Michigan two decades ago. Since then, this Asian beetle pest has decimated ash trees in tens of millions and then invaded 35 other states in the US and some Canada areas. 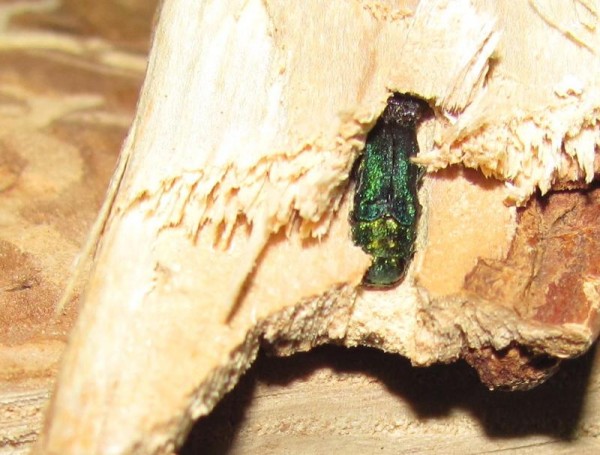 (Photo: Wikimedia Commons)
An exotic species of sparkling beetle, the Agrilus planipennis or the emerald ash borer, is wreaking havoc and killing the ash trees of North America.

A new study is now predicting that the ash trees may fail to recover and be completely wiped. This is because the insect pest also eats young ash trees, destroying the chances of replacement after older trees die.

According to Isabelle Aubin, a Natural Resources Canada forest ecologist, if the ash trees disappear entirely, it will weaken the forest ecosystem.

The Value of Ash Trees

Ash trees are the Venus of the woods. They have great value and are versatile, for they are elastic and tough. They are made into baseball bats, skis, furniture, and guitars.

The forest benefits from ash trees as it provides the food and shelter of many species of insects, squirrels, and birds.

The insect pest is the size of a staple, and its entry into US soil is thought to have occurred through the wood utilized in freight packing. The insect's larva bores through the tree trunks and chews through their tissues. In as short as two years, an ash tree can die from the infestation.

Ash logs are used as firewood, and as they are distributed, this could have also helped spread the insect. Also contributing to the pest's distribution is the transportation of trees from nurseries in areas where the pest is present.

The Worst Forest Pest on the Continent

According to a report from the Emerald Ash Borer Information Network, this borer is considered the most destructive insect pest of forests in all of North America. It is known to kill over 99% of a forest's ash tree population.

According to the report of a research team from Purdue University, ash trees seemed to recover early; for a while, the borer caused devastation in the 2000s. The ash saplings and seedlings have thrived in the following decade, with some areas reaching over 1200 trees per hectare.

Unfortunately, most were dead by the year 2018 because replacement could not keep up with deaths. According to US Agency for International Development ecologist Juliann Aukema, mature trees that would have produced the next generation of seeds aren't there anymore. Aukema thinks it will eventually disappear, following the chestnut tree's demise from a fungal infection.

However, the University of St. Andrews systems scientist Ian Boyd disagrees with the report. He says it is too early to determine the ash tree's future fate. The dynamics between the ash tree and the borer may take decades to form a new symbiotic balance.

In other words, Boyd thinks there is still hope that the ash trees will not be entirely decimated by the Agrilus planipennis, the emerald ash borer.

READ NEXT: Honeybee Pollinators of the Almond Industry Experience Die-Offs by the Billions

Check out more news and information on Pests on Nature World News.