Why Do Banana Slugs Bite Their Partner's Penis Off After Mating?

Banana slugs, the North American terrestrial slugs, which are simultaneous hermaphrodites, were the subject of  Harold Health's class at Standford University in the 1900s.  He noticed something usual in the banana slugs that they were dissecting though:  some had no penis, and some had a stumpy one which seemed to have not been fully developed.

Banana slugs are hermaphrodites, so it is expected that every mature adult should have one.

It is hard to miss the penis of a banana slug as well: it can grow to be 6 to 8 inches, the same length of the slug. The penis is located on its head and emerges in the genital pore.

Heath deemed that the missing penises have been "cast off" and would later regenerate, much like a lizard's tail when cut off. The stump, he believed, was the initial stage of the regeneration. 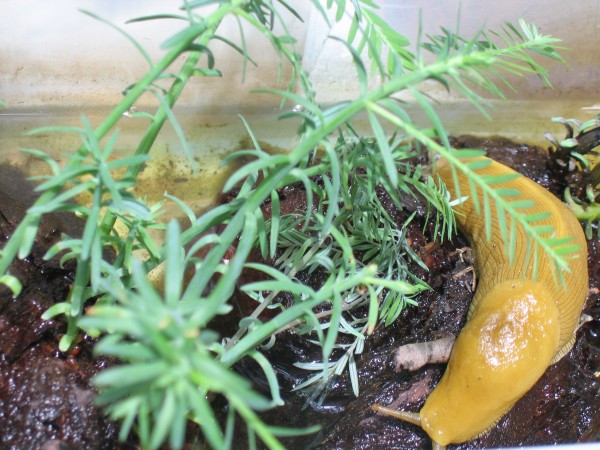 (Photo: Wikimedia Commons)
Scientists explained the mystery behind the missing penis of some banana slugs.

Determined to solve the mystery of the missing penis, he collected 200 slugs and studied them in his lab. Unable to observe a complete union of the slug, he took his research further. He explored the field to observe its sex life.

The mating of the banana slug starts with aggressive biting. The animals then lock around, forming a symbol similar to a yellow yin-and-yang symbol. Then, they insert their penises: one slug provides the sperm, while the other slug is at the receiving end. The partner exchange sperm as well. The procreation takes several hours, then they withdraw and eventually part ways.

But Heath noted something unusual in some couples: after the biting and insertion and the slugs are withdrawing their penises, one of the slugs started to bite upon the walls of the organ of the other slug. The biting was "unusually vigorous" that within several minutes, the penis was completely severed.

Why would they do that?

In 1916,  a paper that he published speculated that the severed penis would act as a plug to keep the sperm.  He also inferred that perhaps, because of the presence of a human observer or some natural enemy, the severing of the penis is a way of separating quickly.

Over the years since Heath's paper was published in 1916, several studies have been made on apophallation, the chewing off of one another's penises. Contrary to Heath's speculation, the severed penises do not regenerate. Why the phenomenon happens, however, is still a mystery.

Here are some of the scientist's theory on why it happens:

They are stuck. Much like wolves, trying to chew off their foot to escape a trap, slugs may also chew up their partner's penis to get away. Broke L.W. Miller, however, disagrees. She did several studies on the behavior of the slugs when she was a graduate student, and she noted that after an erection, the penis becomes limp, and it seems unlikely that slugs get stuck.

Sperm Competition.  Every organism wants to have as many progenies as possible, basing from an evolutionary point of view. A female having several mates can be advantageous as the more partner she has, the more chances that her egg gets fertilized. For a male's perspective, however, more male partners mean less possibility of fathering her offspring.

According to Miller, preventing females from finding other mates favor males in the area of natural selection. To make this possible, males have developed strategies to ensure that their sperm can procreate and through generations.

For hermaphrodites like the banana slug, apophallation may be a strategy to ensure that their sperm alone wins against his rivals. Cutting of a partner's penis means he can't fertilize other eggs, nor seek out another mate. It ensures that his sperm are fertilized by his partner's egg, thus ensuring that the offspring is his.