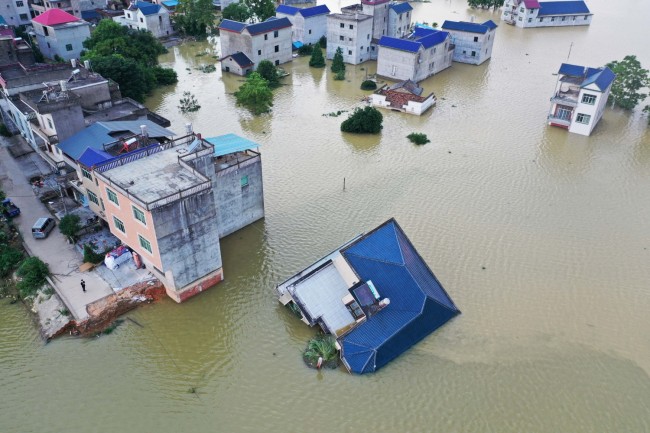 The torrential rains since June had worsened the flooding in China and has caused devastating blows: the flooding submerged 27 provinces, left 141 dead or missing persons, affected 38 million people, and displaced 2. 2 Million residents from their homes.
(Photo : Reuters Connect )

The torrential rains since June had worsened the flooding in China and have caused devastating blows: the flooding submerged 27 provinces, left 141 dead or missing persons, affected 38 million people, and displaced 2.2 million residents from their homes.

Authorities raised the alert to the second-highest level on Sunday, while the province of Jiangxi has raised it to the highest as water levels in Lake Poyang showed a tremendous increase. The flood control situation was described by President Xi Jinping as "very grim" and urged to call for protection of lives and assets using "stronger and more effective measures."

The rains show no promise of stopping in the next days as China's National Meteorological Center forecasted on July 14 that more heavy rains are expected in the Yangtze River Basin area in the next 24 hours.

Heavy rains will be expected on July 15 to 16 in Tibet, Tibet, Xinjiang, Qinghai, Xinjiang, Gansu, Inner Mongolia, Beijing, Tianjin, Liaoning, and Heilongjiang, the northern regions of China. Hai River and Songhua Rivers in Northern China are also expected to inundate in the coming months, the Chinese vice-minister of water resources Ye Jianchun reported.

Ye admits that locals from the north lack the experience to deal with flooding, and more attention should be given to them.

Residents in Hubei, Anhui, and Jiangxi, the flooded provinces in southern China, disclosed to The Epoch Times that their hometowns were submerged after authorities discharged floodwaters at the rivers and lakes as the waters in the dam reached critical levels. The authorities extended no proper assistance, according to the residents.

Wang Ming (not his real name), a resident of Yiguan Village, Tongling City in Anhui Province, said they were forced to leave their hometown, which is near a small dike. He said that the smaller dams were not strengthened, allowing it to collapse naturally. Authorities just let the floodwaters release into the levees, giving up the smaller dikes to protect the bigger ones.

He reported that 12,000 people were displaced in Tongling that day with nowhere to go. They are waiting for the flooding to recede at the temporary shelters.

In Poyang County, Jiangxi Province, several villages flooded since July 8. Authorities claimed to have evacuated affected residents, but several families are still at home, waiting for rescue. There are no signs of floodwaters receding, and the family needs food so badly. Floodwaters in the Hudong village have reached up to the second floor.

In Wuhan, floodwater peaked on July 12. There are also reports from Guangzhou village residents in Caidian District that they were forced to evacuate at 5.A.M. on July 14 as authorities would release waters in their village from the Yangtze River.

Dr. Huang Guanhong, son of famous hydrologist Huang Wanli, said that if the Three Gorges Dam does not release its waters, the upper stream like Chongqing City will be submerged. If it releases water, Wuhan and other cities locate downstream of the said dam will be flooded. He deems that the latter is the case now.

The Situation at Shelters

The World Health Organization (WHO) reminded flooded victims to drink boiled or chlorinated water. They also urged residents not to eat food found or got in contact with the floodwaters.