Quebec Will Soon Have a Fleet of 31 Electric School Buses 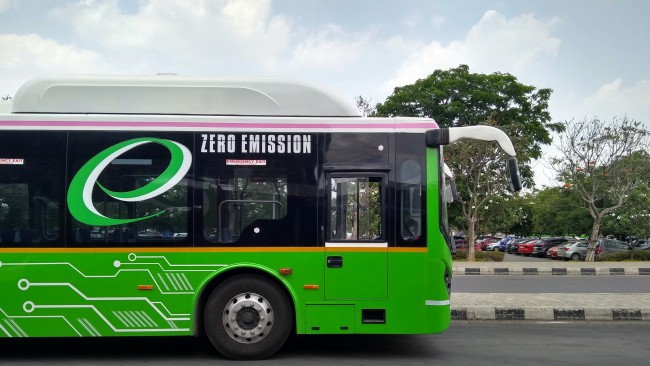 An electric bus at Hyderabad, India,Quebec is going to acquire 27 new units of electric buses to be used by children for school, to be provided by Transdev Canada.
(Photo : Wikimedia Commons)

A study in 2016 found that the lungs of children who live within a hundred meters from a major highway had their function decreased by about six percent, compared to children who live at least 400 meters away from such major highways. For schoolchildren, riding a smoke-belching school bus is one of the worst ways to start the day.

It has also been found that air pollution increases the risk of dying from COVID-19.

The electric buses are set to be deployed for the regions of Montérégie and Estrie in Quebec, starting September 2020. Lion, the supplier of the units, is Quebec-based as well. Transdev Canada aims to electrify all school buses in Quebec by the year 2025.

Each electric school bus will reduce pollution equal to the amount produced by five cars, or an equivalent of greenhouse gas emissions of 23 tons. A fleet of 31 operational electric school buses is equal to preventing 155 regular gas-powered automobiles from polluting our air.

The electric school bus specifications include a range of 100-250 kilometers or 65-155 miles per charge and single-speed electric powertrain, with an AC onboard charger and safe and high-performance batteries. Lion constructed the body, chassis, and battery packs. A bus can seat 72 passengers comfortably.

Transitioning to a fully electric bus fleet is to be done gradually and be moderated as they are integrated into the transport networks of the schools under Transdev's supervision.

The company said that they placed their order before the COVID-19 pandemic. It will surely help in alleviating the air pollution and health problems that communities all over the world are currently experiencing.

According to Transdev Canada's Quebec and Maritimes Executive Vice-President Marie-Hélène Cloutier, the order was part of the ambitious development plan they are laying out for Quebec. She says they believe they have a major role in communities, and that they believe in the sector of sustainable mobility in Quebec.

Meanwhile, Transdev Canada's Chief Executive Officer Arthur Nicolet says that they want to commit energy transition to serve our younger generation, who compose tomorrow's passengers of public transportation. They partnered with the government of Québec and Lion, a Quebec company. The former's support, Nicolet says,  is critical to their strategy for electrification, while the latter has long been Transdev's working partner.

Transdev Canada has been operating over 800 units of electric buses all over the world as of the end of 2019. By 2020's end, it was targeting a total on-order and operated a fleet of 1,200 units. These include hydrogen fuel cells and battery-electric buses. This will undoubtedly mean cleaner air in the places where these buses will run.