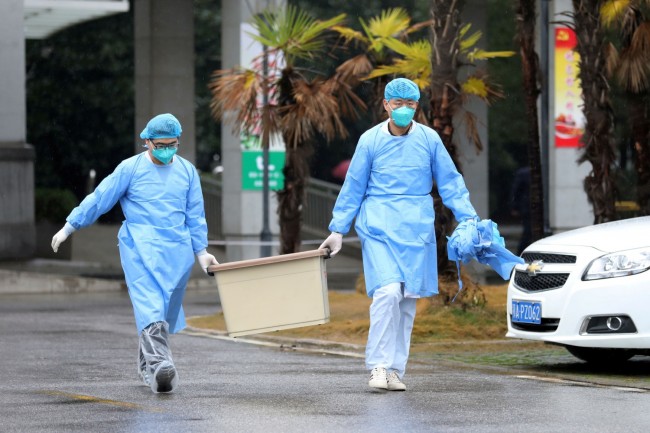 FILE PHOTO - Medical staff carry a box as they walk at the Jinyintan hospital, where the patients with pneumonia caused by the new strain of coronavirus are being treated, in Wuhan, Hubei province, China January 10, 2020. Picture taken January 10, 2020.
(Photo : REUTERS/Stringer/File Photo) 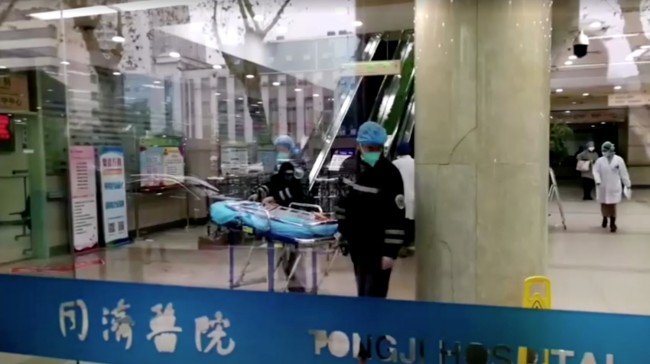 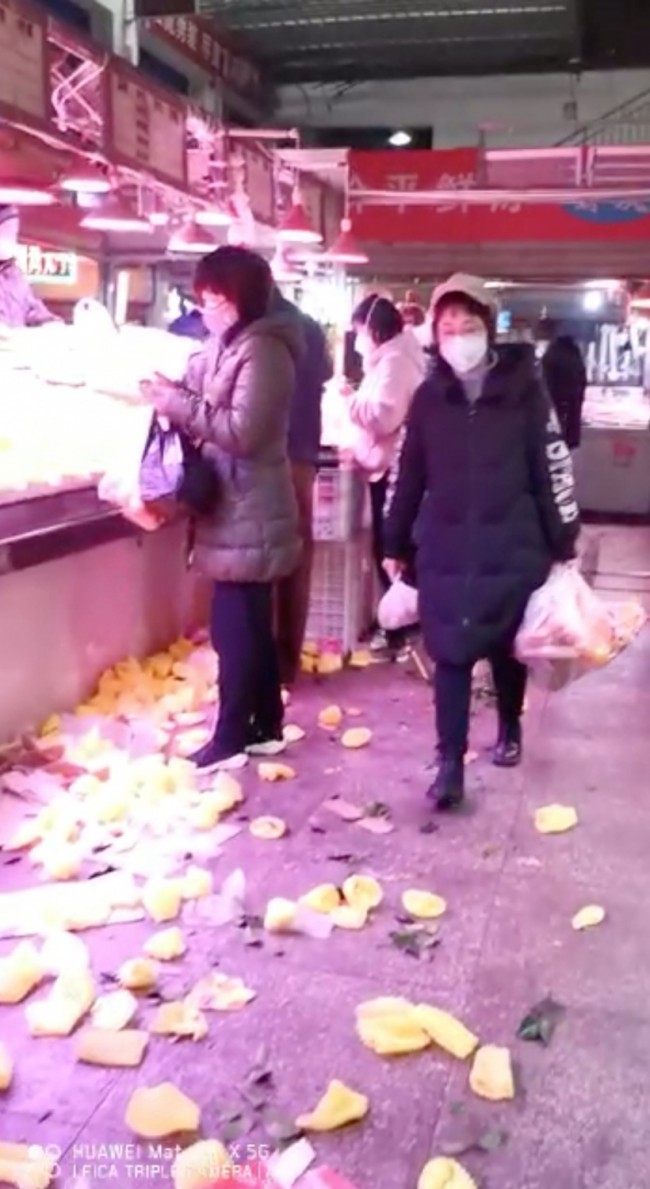 Customers wear masks inside a food market in Wuhan January 23, 2020 in this still image taken from video obtained by REUTERS.
(Photo : REUTERS) 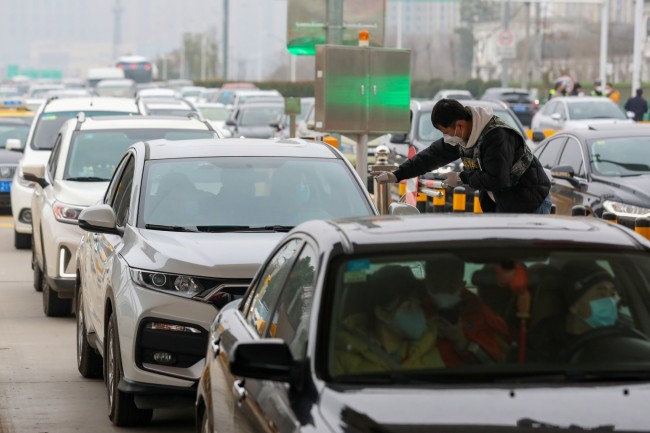 A staff member from a local sanitation and epidemic prevention team checks body temperature of a passenger in a car at a toll station in Wuhan, Hubei province, China January 23, 2020.
(Photo : China Daily via REUTERS)

Disturbing pictures show Chinese citizens lying lifeless on the floor as Wuhan struggles to cope with the lethal coronavirus.

The city, which is the epicenter of the outbreak, has been dubbed "Zombieland" by desperate locals.

Harrowing pictures on social media display human beings collapsed on the street and in sanatorium waiting rooms amid the epidemic, which has claimed the lives of more than 15 people.

In one traumatic clip, a person is seen lying unresponsive on the floor even as medics sporting hazmat suits and gas masks try to help him.

How long until it's considered an international health emergency? People literally dropping like flies in Wuhan & is defo being covered up.#Coronavirus #CoronavirusOutbreakpic.twitter.com/1Ik7WBUpNH — Jamie (@JamieTheStone) January 23, 2020

According to reports, the victim - who turned into carrying a shielding mask - changed into waiting in line for office work while he lost attention and collapsed.

Another horrifying photo, in a report by The Sun, reportedly lies dead in the street with his head cracked open - bathing in blood.

DEAD IN THE STREET

Some of the other pictures being shared widely on social media are believed to be from an animal marketplace in Wuhan. Bats and snakes are likely the cause of the virus.

Residents in the "ground zero," where the virus originated, had been asked to stay away from crowds and no longer to attend public gatherings, leaving the streets looking like a ghost town - in spite of its 11 million population.

All transport systems in Wuhan have been locked down in a desperate bid to forestall the spread of the bug.

The United States reported its first patient infected by the novel coronavirus (2019-nCoV) as of January 21. A US resident who arrived in Seattle from China was diagnosed - according to BBC, citing the announcement from the Centers for Disease Control.

The Sun reported that eleven sufferers are being dealt with in Europe, too - including Scotland, Belfast, Northern Ireland, and the United Kingdom.

The latest figures suggest the number of cases in China has now risen to 616 with other victims hospitalized in Japan, Thailand, South Korea, Singapore, and the US.

And with the virus spreading all over the world, questions are being requested about how local government in Wuhan treated the outbreak in the latest weeks.

The vital Chinese town, which has a populace of eleven million, is the epicenter of the crisis with the virus believed to have originated from snakes at a live animal market in December.

Specialists say the 2019-Nov could be transmitted from human to human interaction.

There also are disturbing memories from Wuhan of medics in the latest weeks failing to test patients who were honestly showing signs and symptoms of the illness.

Kyle Hui informed the New York Times that in spite of his stepmother having the appropriate symptoms, which include a cough and a fever, doctors wearing hazmat suits refused to check her for the virus.

He said she died on January 15 and that her death certificates say "severe pneumonia" in relation to coronavirus.

And whilst she has not been recorded as one of the reliable victims of the bug, Mr. Hui claims medical doctors advised him to cremate his stepmother's body because they suspected she had the disease.

Guan Yi, a Hong Kong-based infectious disease expert, believes a "bigger" outbreak as the modern disease might be ten times worse than the SARS crisis.

He said: "I even have experienced a lot and in no way felt scared. Most (viruses) are controllable, but this time I am scared."

The expert claims he had to "escape" Wuhan the day gone by after witnessing the "jaw-dropping" lack of preventative measures enforced by local officers.

Now several primary cities, together with the capital Beijing, have observed Wuhan in banning public gatherings during the New Year celebrations.

This is every other sign that China is expanding its efforts to include the virus which started the remaining month - however, is it too little too overdue?

Social media users inside the city have blasted government on Weibo for ready weeks to place the town on lockdown.

Xiao, 26, a number one school trainer in Wuhan, told The Guardian: "When I noticed the information once I woke up, I felt like I changed into going to go crazy. This is a touch too late now. The authorities' measures are no longer enough."

Others criticized nearby authorities on the social media platform Weibo as #PrayforWuhan was trending.

The airport and educate stations were close down to outgoing passengers traveling after 10 am local time.

Petrol stations have been rammed with motorists seeking to get as much gas as viable amid rumors supplies had run out.

Pharmacies have offered out of face masks, residents said.

Seven million humans in Huanggang, that's 45 miles away, have been told now not to leave after there were confirmed cases.

Dr. W. Ian Lipkin, a US epidemiologist at Columbia University who counseled China and the World Health Organisation throughout the SARS epidemic, stated infected victims outside Wuhan could keep unfolding the disease.

He said: "The horse is already out of the barn."