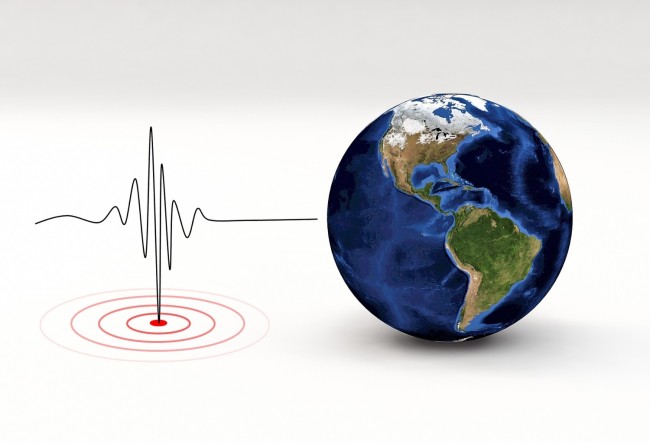 After five separate earthquakes rattled some 100 kilometers off the northern coast of Vancouver Island Monday,no tsunamis warnings nor reports of damages were reported according to federal officials.

Earthquakes Canada reported that the first quake measured magnitude 5.1, the second measured 5.6, the third estimated 5.8, the fourth and strongest measured 6.0, and a later earthquake measured 4.8.

A busy day in one of the most seismically active regions of Canada - offshore Vancouver Island.
Four earthquakes between M5.1 and 6.0 over the past 5 hours (and many more aftershocks). No damage/impacts
Latest information: https://t.co/XG5si9iphu
Shaking: https://t.co/pEuqG9lO4P pic.twitter.com/qMVEwlKGqX
— John Cassidy (@earthquakeguy) December 23, 2019

According to Natural Resources Canada, the first 5.1 quake happened at 8:44 a.m. beneath five kilometers under the ocean's surface. The epicenter was roughly 162 kilometers west of Port Alberni.

The second 5.6 magnitude earthquake occurred in a similar area at 11:13 a.m. It rumbled roughly 185 kilometers west of Port Alice at a depth of five kilometers. The third tremor struck the region at 11:49 a.m - just roughly half an hour after the second earthquake.

The third earthquake had a magnitude of 5.8 and rumbled 178 kilome†ters west of Port Hardy at a depth of approximately five kilometers under the ocean's surface. Natural Resources Canada then recorded the fourth earthquake at 12:56 p.m. Monday.

The fourth quake measured 6.0 in magnitude and was located approximately 186 kilometers west of Port Alice, at a depth of five kilometers.

Hours later, at 3:38 p.m., a fifth earthquake rumbled under the ocean near the northern tip of Vancouver Island. The 4.8-magnitude quake occurred at a similar five kilometers under the surface of the water and was located approximately 168 kilometers west of Port Hardy.

According to Natural Resources Canada, there have been no reports of damage from any of the quakes, and the agency does not expect residents of Vancouver Island to have felt the five tremors. "There are [damages reported], and none would be expected," reads Earthquake Canada's details on the tremors.

The quakes are on the small Juan de Fuca tectonic plate, situated between the Pacific Plate and the North American Plate.

The area is exceptionally geologically active and a regular location of small earthquakes, many of which are never felt from the land.

A whooping 4,000 earthquakes take place across Canada every year, according to the Canadian Encyclopedia. The coast of British Columbia is the most earthquake-prone region in the country. Specific earthquakes pose a severe threat, while the majority of these earthquakes are hardly felt.

Having a well-stocked earthquake bag and knowing where to place your kit strategically is crucial. Take into consideration your everyday essentials, from medicine, hygiene products, to ready-to-eat food and water. Don't forget your family pets, too. Be sure to make safety plans for your four-legged friends in case of an earthquake.