More Than 200 Elephants in Zimbabwe Die Due to Severe Drought 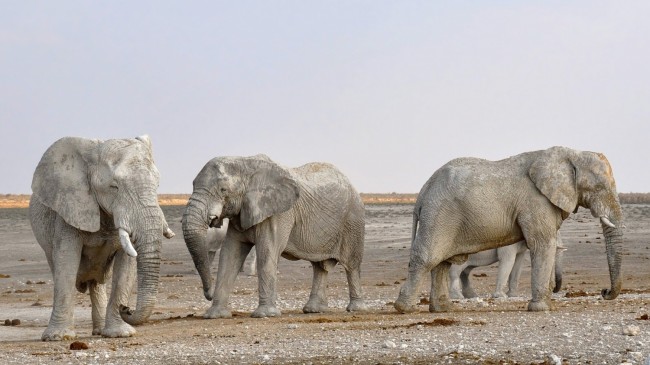 More than 200 elephants in Zimbabwe died in the past two months due to severe drought spanning the country. Other animals, including impalas, zebras, hippos, zebras, buffaloes, and giraffes are also dying due to the dry spell.

Zimbabwe National Parks and Wildlife Management Authority spokesman Tinashe Farawo told The Associated Press that mass relocation of animals is planned to try to limit future deaths. Farawo said the situation wouldn't improve until it rains in the region.

At least 600 elephants and two lion prides would be moved to less congested parks. Farawo said 2,000 impalas, 50 buffaloes, 40 giraffes, and a pack of wild dogs would also be relocated.

He told AP that almost every animal is affected. "Of course, elephants are easily noticed during patrols; however, some bird [varieties] are [severely affected as] they could only [produce] in [particular tree tops] and those trees are being knocked down by elephants," Farawo added.

Animals wandered away from the park to nearby communities in a despairing attempt to search for food and water. The situation threatened human populations, too, as the park reported more than 30 people died from conflict with animals this year.

The animals "have exceeded their ecological carrying capacity," he added. "If the populations go unchecked, the animals will threaten the very ecosystem they depend on for survival."

Park authorities typically follow a policy of not intervening in assisting animals; however, the severe weather conditions convinced them otherwise. They started bringing in food and water to help animals in fear that more deaths might happen before the rainy season.

Wildlife officer Munyaradzi Dzoro told AP they used to assume that "nature should take its course." However, Dzoro said they are doing manipulative conservation as they are now forced to intervene as everyone in Zimbabwe are unsure when and how they would receive rain. He explained that they had to intervene to maintain population sizes and to avoid losing animals.

According to AP, Mana Pools - a UNESCO World Heritage Site along the Zambezi River - periodically experiences hot, dry weather at this time of the year. However, inadequate rainfall in 2018 caused far worse droughts than usual.

Zimbabwe is severely affected by climate change that has impacted weather patterns. According to World Food Program (WFP), the drought affected at least 11 million people. WFP also eyes distributing large-scale food distribution to countries affected to drought, according to their website.

Botswana and Zimbabwe have the largest elephant populations in the world, with 13,000 and 85,000, respectively. However, Zimbabwe finds it challenging catching up with the large numbers of elephants.

The country requested if they would be allowed to sell ivory stockpiles and export live elephants to gather conservation funds and alleviate congestion in the drought-affected parks.

The parks' agency said the country exported 101 elephants between 2016 and 2019 to China and the United Arab Emirates and raised more than $3 million for conservation efforts.