Major breakthrough: Pigs observed to be capable of using tools 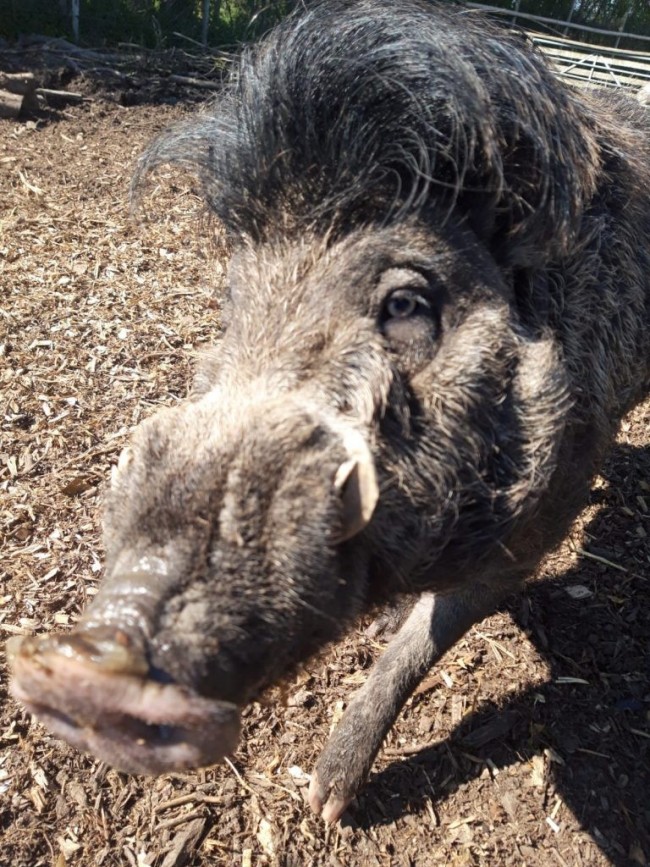 Visayan warty pigs are critically endangered swine species native in the Philippines. Currently, there are 200-300 exist in captivity. It is still unknown how many left in the wild.
(Photo : Wingham Wild Park) (Photo : Wingham Wildlife Park) Visayan warty pig is a critically endangered species in the Philippines. Mohawk is its most notable trait.

A rare species of swine, which is capable of using tools, has been discovered recently in the Philippines.

The species is called Visayan warty pigs, with the scientific name of Sus cebifrons. These pigs are now critically endangered and native in the Philippines. Ecologist Meredith Root-Bernstein first observed the behavior of the pigs in October 2015, while watching a family of rare pigs at a Parisian zoo. One of the pigs was seen digging soils using a piece of bark in its mouth. Root-Bernstein described this scenario as "pretty cool" and began observing it more.

Science defined tool use as "the exertion of control over a freely manipulable external object with the goal of (1) altering the physical properties of another object... via dynamic mechanical interaction, or (2) mediating the flow of information."

The team kept coming back to Jardin des Plantes for months to study the unusual behavior. Although it was initially dismissed as just a nest-making activity as warty pigs were known to make one every six months as preparation for the arrival of its children, Root-Bernstein and her team had videotaped the family using tools four times in 2016, and seven times on the following year.

Experiments were also conducted, which included putting four different kitchen spatulas inside the enclosures. Only one of these spatulas was used twice, giving the team a hypothesis that the pigs preferred easy-to-wield tools. Moreover, the team also noticed that the mother pig always uses tools in the middle of the nest-building process, suspecting that the mother may have learned how to use the tools by herself and passed her knowledge to its family.

Unfortunately, Root-Bernstein noted that the small data set is a hindrance to the viability of the study. The captivity is also noted, as animals tend to behave differently when inside an enclosure. Yet, she remained hopeful that even wild Visayan warty pigs might be using tools. Root-Bernstein's study appeared in the journal Mammal Biology.

Wild pigs are often ignored by scientists, resulting in little to no study. Root-Bernsteins suspected that such innovation might not be unusual at all, that such "innovation might have escaped the human's eyes".

Fernando Gutierrez, president of Talarak Foundation Inc., a Filipino nonprofit conservation group, agreed with her. According to him, he had witnessed a group of wild Visayan warty pigs that uses rocks to know if an electric fence is working or not. If the rocks make sound, the group backs off. Otherwise, they cross.

Another ecologist, Rafael Reyna-Hurtado, noted that the forest hogs he observed in Uganda were using their snouts to clear the ground from debris. With that observation, Hurtado questioned, why use a tool if they can use their snout instead? Therefore, Reyna-Hurtado encouraged wild pig scientists to look out for more tool use.

Tool use has been observed in different species such as chimpanzees, crows, and dolphins. For Root-Bernsteins, it is particularly fascinating to study it because it's a trait easily observed in humans. This activity highlights a common evolutionary history, and quoting Root-Bernsteins, "It brings us closer to animals, and helps us realize it's all connected."