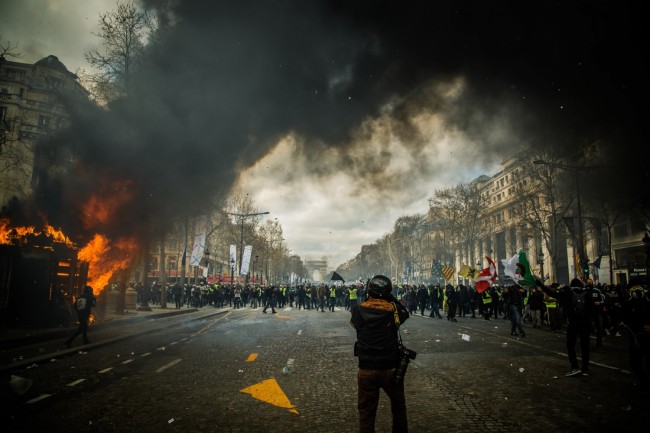 Breathing dirty air can make you sick. But according to new research, it can also make you more aggressive.

That's the conclusion from a set of studies recently authored by Colorado State University researchers in economics, atmospheric science and statistics. Together, the team found strong links between short-term exposure to air pollution and aggressive behavior, in the form of aggravated assaults and other violent crimes across the continental United States.

The results, derived from daily Federal Bureau of Investigation crime statistics and an eight-year, detailed map of daily U.S. air pollution, will be published in a forthcoming edition of the Journal of Environmental Economics and Management.

The paper's lead author is Jesse Burkhardt, assistant professor in the Department of Agricultural and Resource Economics, who teamed up with fellow economist Jude Bayham in the same department; Ander Wilson in the Department of Statistics; and several air pollution experts in civil engineering and atmospheric science.

Air pollution scientists typically measure rates of pollution through concentrations of ozone, as well as of "PM2.5," or breathable particulate matter 2.5 microns in diameter or smaller, which has documented associations with health effects.

Eighty-three percent of crimes considered "violent" by the FBI are categorized as assaults in crime databases. In the researchers' study, they observed whether crimes occurred inside or outside the home; they found that 56 percent of violent crimes and 60 percent of assaults occurred within the home, which is an indication that many such crimes are tied to domestic violence.

"We're talking about crimes that might not even be physical - you can assault someone verbally," co-author Bayham said. "The story is, when you're exposed to more pollution, you become marginally more aggressive, so those altercations - some things that may not have escalated - do escalate."

The researchers made no claims on the physiological, mechanistic relationship of how exposure to pollution leads someone to become more aggressive; their results only show a strong correlative relationship between such crimes and levels of air pollution.

The researchers were careful to correct for other possible explanations, including weather, heat waves, precipitation, or more general, county-specific confounding factors.

The team published a companion paper in the Journal of Environmental Economics and Policy with similar results that used monthly crime statistics. A third paper in Epidemiology, with lead author Jesse Berman at University of Minnesota and co-authors from CSU, used EPA pollution monitor databases and different statistical techniques and came to similar conclusions.

The tool that allowed the team to overlay crime data with pollution data was originally used in collaboration with CSU epidemiologist Sheryl Magazmen to study health effects from air pollution, explained co-author Jeff Pierce, associate professor in the Department of Atmospheric Science and a Monfort Professor. Pierce, associate professor Emily Fischer and researchers Kate O'Dell and Bonne Ford, had previously worked with Magzamen to detail how smoke and particulate matter exposure correlated with things like hospitalizations and asthma inhaler refills.

Burkhardt had been wanting to study whether breathing smoke could enact behavioral change when he met atmopsheric scientist Pierce.

"Several years ago, Fort Collins experienced a fairly severe wildfire season," Burkhardt said. "The smoke was so bad that after a few days, I started to get frustrated, and I wondered if frustration and aggression would show up in aggregate crime data."

Pierce recognized that the pollution-concentration product he and colleagues had designed, which provided detailed concentrations of total particulate matter and the fraction from smoke, would be useful for Burkhardt's desired application.

"The results are fascinating, and also scary," Pierce said. "When you have more air pollution, this specific type of crime, domestic violent crime in particular, increases quite significantly."

The economists calculated that a 10 percent reduction in daily PM2.5 could save $1.1 million in crime costs per year, which they called a "previously overlooked cost associated with pollution."

The authors remain interested in the relationships between pollution and cognitive outcomes, Burkhardt said. They are now working with a large online chess platform to determine if increased pollution exposure is correlated with worse chess performance.

The results are just one outcome of CSU's philosophy around "cluster hiring" faculty from disparate fields to study interdisciplinary problems. In this case, several of the researchers came to CSU under the Partnership for Air Quality, Climate and Health initiative launched several years ago by the Office of the Vice President for Research.